After a big day in Cusco on Saturday, the interns got up early for our long run on Sunday ranging from 75-90 minutes. After that we had a lowkey day reading, journaling, and eating. The Chaska (hostel) staff spent all afternoon making a huatia (an underground oven) where they cooked potatoes underneath stones. They generously shared their food with us, and even had condiments like uchucuta (a green spicy peanut sauce) to put on the potatoes!

Monday was an early wakeup and run, followed by the arrival of Romeo. Although very sleep deprived, he didn’t want to miss out on time spent at Ccochahuasi (the animal sanctuary) and left Pisac only about 30 minutes after arriving there. While there, we were first tasked with cleaning the monkey cages. Armed with only a broom, rag, and dustpan, we attempted cleaning the enclosure floor while the monkeys jumped onto our heads, clung to our shoulders, and reached into our pockets! It was quite an experience. After that, we split into groups and cleaned the macaw, eagle, puma, and Andean cat enclosures (all while the animals were in the cages with us!) Some of us painted a wall and others carried waste out to be composted as well. It was a productive time at the sanctuary and an awesome experience to see the condors and other animals native to Peru!

After the animal sanctuary we walked a bit down the road to Awanakancha, a weaving co-op that focuses on preserving traditional Andean weaving techniques. Awanakancha also houses llamas and alpacas, a fascinating museum detailing the history of those animals and their importance in Peruvian culture, and a gift shop that sells authentic (but expensive!), hand-made products.

Monday afternoon, Matt and the interns had a very productive meeting with Sanan, the founder of Amistad Sagrada (a local non-profit service organization in Pisac). It was very interesting to hear how Sanan arrived in Pisac from the United States almost ten years ago, and what he has done for the community since then. We left the meeting feeling optimistic about collaborating with Sanan and his endeavors.

Tuesday started off strong with a delicious papaya (Scott’s new favorite food) after a fun workout day at the track. We continued on with the day and volunteered at Tambo School, where we were able to help with an english camp taking place throughout this week. Our evening was spent orienting Romeo, doing yoga, and indulging in a delicious steak and eggplant dinner created by Matt. Wednesday started off similarly (with the papaya of course) and we went off to Tambo for another day of english camp. In the afternoon Grace and Nicolette led their first English lesson with a local woman, while Dana and Isabel went to Sanan’s store to assist with an English class. Following the lessons, we all had to say goodbye to Lara, who had to go home today :(. 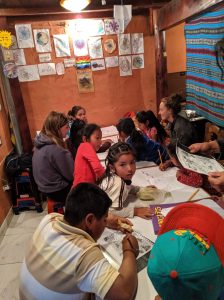