On Sunday we woke up to another beautiful morning in Ollantaytambo! Nicolette did her longest run yet at altitude, running 15 miles with Romeo biking alongside her. Arika completed her first morning run with Sarah while Dana and Grace also did an easy few miles. Those participating in the Spanish immersion program resumed their lessons in the morning and afternoon while the interns handed out flyers promoting the Pisac 5k in Ollantaytambo and Urubamba (a city just down the road). In the afternoon, the high school boys went for their third run – they are crushing it in thin air!!
On Monday morning everyone took a day off from running. The Spanish immersion participants continued with their lessons and the interns and staff utilized their free day to go hiking just down the road. It was quite an intense hike – Sarah, Dana and Romeo headed back just after lunch and Tyler, Matt, Nicolette, and Isabel continued on with the goal of reaching an alpine lake. The hike quickly turned into an off-trail climb that tested our will and ability to aguantar (persevere). Although the alpine lake turned out to be much farther than expected, the foursome who continued reached an amazing grassy knoll at more than 14,000 feet. The views were incredible and definitely worth the difficult climb. That night, the interns and staff had a great meal at Heart’s Cafe and ended the night with their sixth circle – a great time to reflect on our time in Ollantaytambo. Those in the Spanish immersion program enjoyed their final meal with their families, most commonly consisting of delicious beans, rice, quinoa, pollo, or even dessert rice (with cinnamon and condensed milk).
Tuesday morning began with morning runs for everyone. Matt and Nic left early for Cusco to pick up Ana-Sophia, Ellie, and T’yana from the airport and the interns and Sarah departed Ollantaytambo in the late morning. The high schoolers and Grace had their final Spanish lessons and then also arrived in Cusco in the afternoon. Many of us in the Spanish immersion program gave gifts and notes to our families and said our final goodbyes. At our hostel in Cusco, the girls were led through a brief orientation and then the entire STRIVE group played some fun icebreakers and games to get to know each other!
On Wednesday a portion of the group went to a mondo track in Cusco and did a workout – not an easy task at 11,000 feet! Everyone had a great breakfast of crepes, potatoes, and juice and then we all piled into a big van with all of our luggage and departed for Pisac. The high schoolers had their first lunch in the Pisac market and then were led through a Peruvian history and culture lesson with presentations by the interns! After that the high schoolers got to know Pisac better by going on a scavenger hunt, and then began their first service-learning lesson while the interns gave private English lessons. In the afternoon some of the group went for a run while Sarah led a strength session. The high schoolers went to El Sabor for dinner on Wednesday night while the interns cooked together again for the first time in a week! 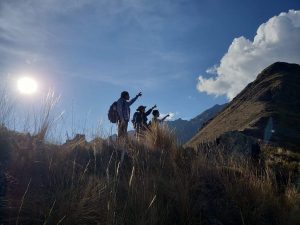 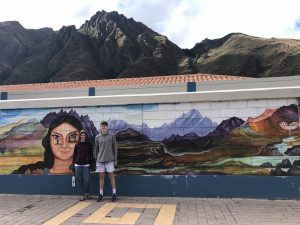