Hello from the interns in week five of our stay here in Peru! This Sunday was a mix of a free day and service work. All the interns got breakfast at the market, and afterwards we regrouped in the courtyard to do some service-prep for later in the week. By mid afternoon the interns headed across the street to a restaurant to watch Peru play soccer in the final game of Copa America. They sadly lost to Brazil 3-1, but the interns thoroughly enjoyed the experience to watch a high stakes game in one of the participating countries. During the game the interns also indulged in Inca Kola, a yellow bubble gum flavored soda that Grace described tasted like “cough syrup”. The Inca Kola also helped instigate the interns attempt to eat less sugar as they decided eating multiple Sublime bars or Casino cookies a day was not necessary. The night ended with dinner courtesy of Grace and Romeo.

Monday started similar as most other days with our morning runs with another reappearance of Spirit, our trusty steed/dog. Due to no classes at Tambo de Gozo, we loaded up in a van and headed off to a high altitude lake. The group started on the two mile hike around the lake and paused half way through to take a much needed ice bath. The interns brought their swimsuits with the intent to swim, but after wading thigh-deep into the chilly water they quickly scratched that plan. After powering through 10 minutes in the icy lake, we finished up the loop and headed back down to Pisac for our afternoon service projects. On Monday, our afternoon projects was teaching English to various people who expressed interest in private lessons. Matt and Isabel were both on dinner duty that night before we headed off to our fifth circle. The moon lit up the sky as everyone took turns saying their monos, moscas, and mariposas.

Tuesday morning was filled with volunteering at Tambo de Gozo and lesson planning. For some, the afternoon called for a second run and for others it was a great day for a long strength circuit, either way our interns got a well rounded day of fitness in as you always do at nearly 10,000 feet of elevation. Sadly the group came back to a town wide power outage which lost us light but luckily only for a couple of hours which was just in time to finish dinner of rice, guac, and sweet potato veggie patties for a perfect end of yet another amazing day in Pisac.

Wednesday, as usual, called for a morning run starting for most at 6:30 while Romeo, Matt, and Tyler left at 6 to run 21km to celebrate Romeo’s 21st birthday. In the morning the interns helped clean Dr. Daniels site by clearing brush and weeds from the nearby indigenous plants. Back in Pisac, the team was thankful for an hour break from the physical labor before heading out to teach English. Nicolette and Grace opted to do private lessons this afternoon while the rest of the group went off to Ccaccaccollo. At Ccaccaccollo a large group of children from the local school showed up for lessons. After a couple of hours of teaching, the group went back to the hostel and started packing to leave for Ollantaytambo where the interns will meet up with the first group of high schoolers. The night was closed well with a celebratory birthday dinner for Romeo at a local Pisac italian restaurant. 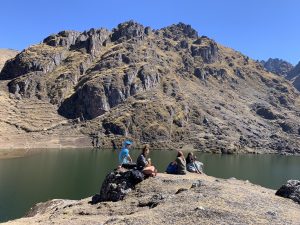 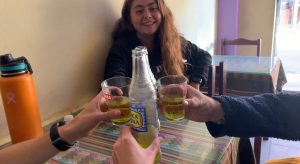