What time is it? That’s what my body wants to know. It’s currently 1:45pm in Doha, 5:45am in DC, and some time in between wherever we’re currently flying at 37,000 ft above sea level. But, the sun is shining as we glide over a sea of clouds over a sea of water and – according to the screen in the seat in front of me – we’ll be landing in Doha in 3 hours and 38 minutes, so I’d better get used to it being afternoon. The coffee helps.

This is my first trip outside of the Western Hemisphere. It’s my first trip to Asia (and Africa, thereafter). My first trip to a non-Spanish-speaking foreign country (other than 12 hours in Brazil). My first time flying across multiple time zones. So far, I’m mildly exhausted but enjoying the sense of newness and adventure that comes with it.

When I accepted a spot on the US National Team to compete at the 50km World Championships in Doha, Qatar, my initial anxiety stemmed not from the 31 mile race, but from the 6985 mile flight. I’ve had a long-standing (though gradually receding) fear of flying and the idea of being stuck on a plane for 13 hours was cause for some trepidation. But it was an opportunity I couldn’t refuse; and, confronting one’s fears is never a bad thing.

And so, I find myself packing up my laptop and snacks, giving a final hug to Richard Parker and Mariana, and beginning the long trek to the airport. 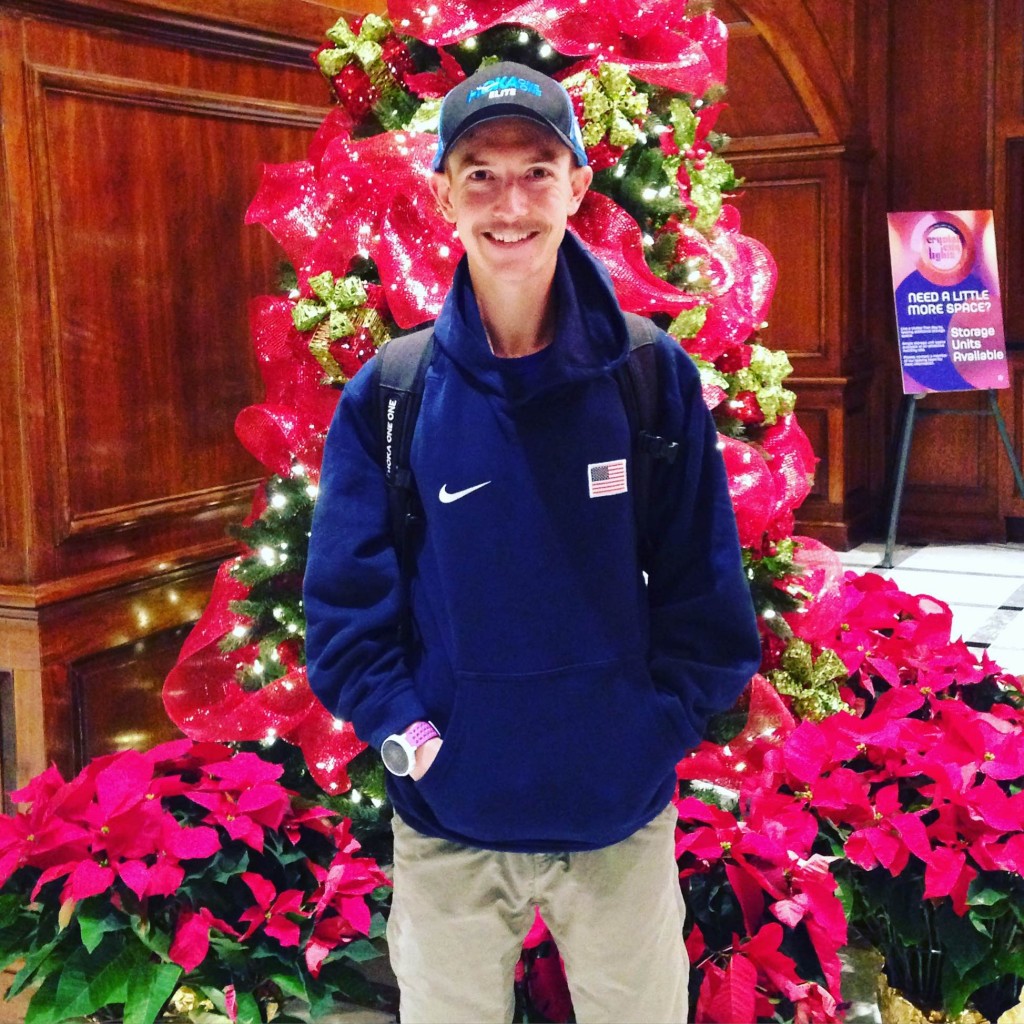 Unlike every other flight I’ve taken from DC since moving here, my flight to Doha is leaving from Dulles – the DC area’s enormous, international airport. I’m lucky in that Dulles is one of the few airports in the US with direct flights to Doha on Qatar Airlines. While the idea of a 13 hour flight was intimidating, at least it’s logistically simple.

Immediately, everything is grand and new. Dulles is a monster compared to DCA. The check-in line for Qatar already stretches out of the snaked up queue. Luckily, I’ve already checked in online and, skipping the long line for those checking bags, walk up to the counter to claim my boarding pass.

A friendly mustachioed man takes my passport and starts plunking away at his computer.

“Can you please place your carry-on on the scale?” he asks.

I set my HOKA backpack down and he slips a blue luggage tag on it. I pulled it off and set my roller-board on as well. I do take pride in my packing ability and had purposefully packed extra light as to avoid having to check a bag, especially on the way to Doha. Losing a bag right before a race is something I’d really like to avoid.

Frustrated, I open my bag and remove the absolute essentials – my singlet, racing shoes, gels, etc. – and stuff them into my backpack. As I’m doing this a security guard asks me to move and let someone else check in, so I carry my load away from the counter.

With my bags re-packed, I start to consider my options. I look at the other passengers and see carry-ons significantly bigger than mine. But this guy will recognize me, so I decide to take a gamble and enter the long, snaking line to the standard check-in. Best case scenario, I’ll get to keep both my bags, and worst case scenario I’ll be in the same boat.

When it’s finally my turn, I proceed to a new agent who, once again, asks for my passport and begins plunking away at his keyboard.

“How many bags are you checking?” He asks.

He doesn’t even weigh the bags but simply prints out my boarding pass and ushers me off, signaling to the next person in the still bloated queue. Success! 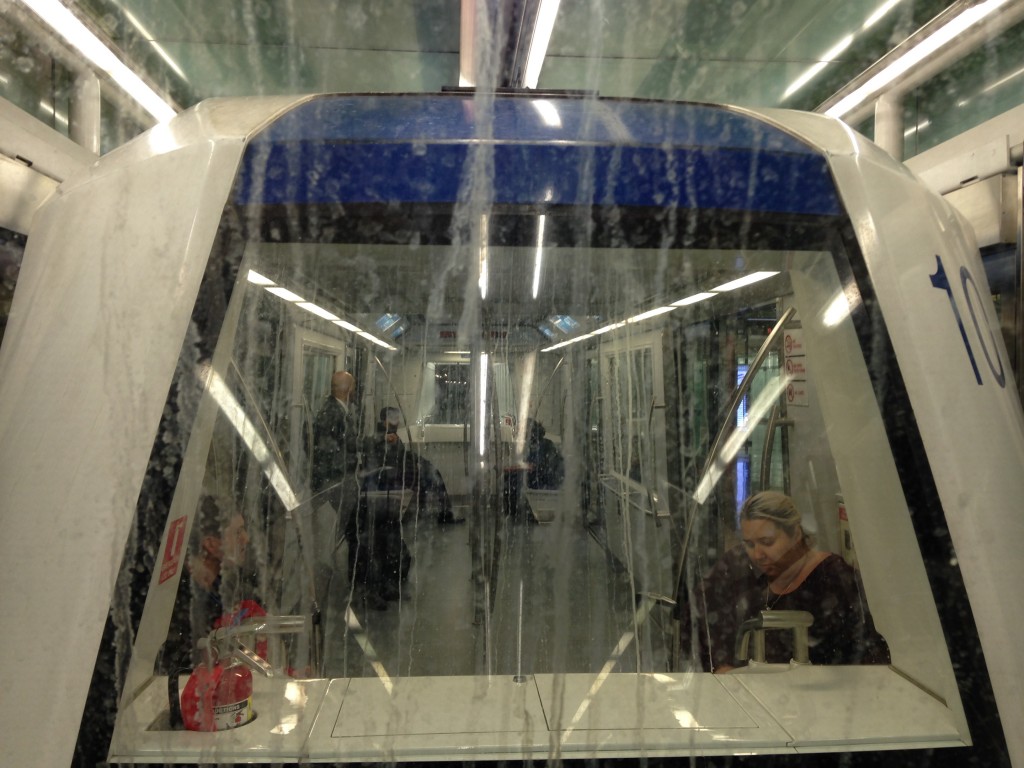 On the train en route to Terminal B at Dulles

I make my way through security with no problem (the TSA does a quick test of my powerade powder) and then board the train which will take me to my departure terminal. After a surprisingly long train ride – another demonstration of the scale of the airport – we’re spit out into a giant escalator-filled cavern and hoisted up into Terminal B.

Flights are leaving for London and Dubai and Bogota and finally I find gate B39 and Qatar Airlines fight to Doha. I make myself a big cup of sleepy-time tea and try to relax before the red-eye flight. It’s already 4am in Doha.

I’m immediately struck by the airline’s hospitality. Qatar has a reputation for being a super nice airline and it shows. At 7:24pm, they make an announcement, sincerely apologizing for the delay of boarding (which was supposed to begin at 7:20pm). By 8pm, we’re on the plane – a beautiful, new 777. 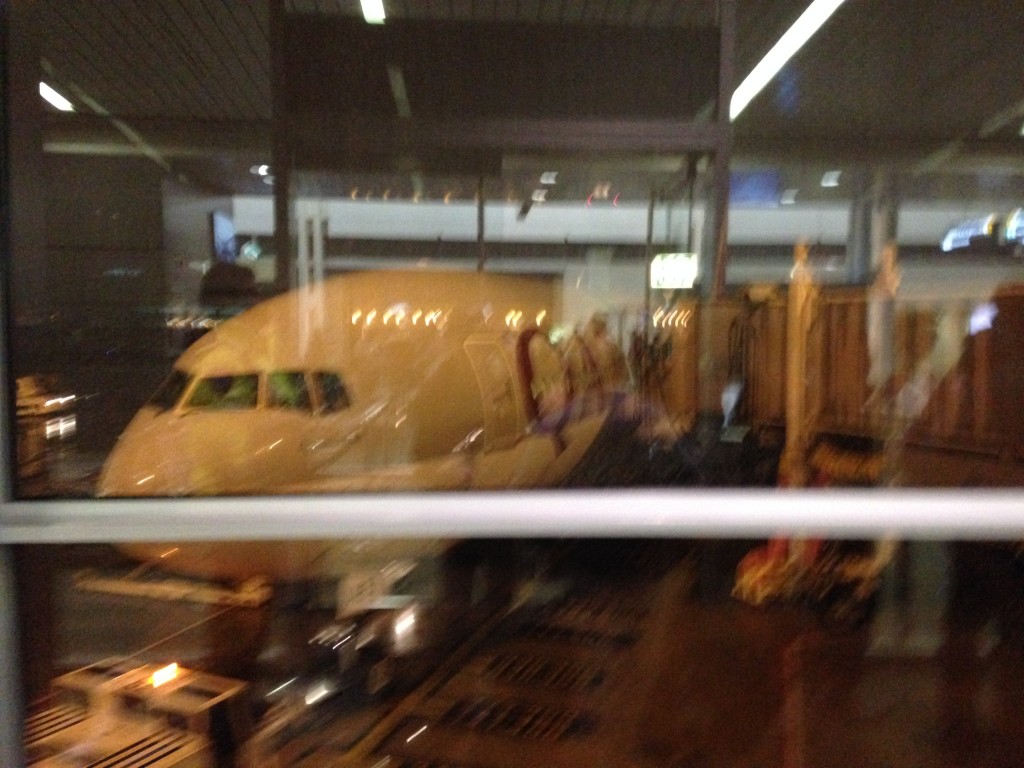 I try to doze as soon as I get comfortable. My plan is to rest for the first half of the flight and then wake up and stay relatively active for the second half, such that by the time I get to evening in Doha, I’ll have been awake for more or less a whole day and should be able to get to sleep.

Between my boney frame and the adrenaline of being on a new adventure (not to mention the several infants in the two rows in front of me), I have a hard time falling asleep, but I’m able to close my eyes and rest for a few hours. I eventually wake up and try to do some work; this seems to do the trick. I can barely keep my eyes open and finally get some real sleep. 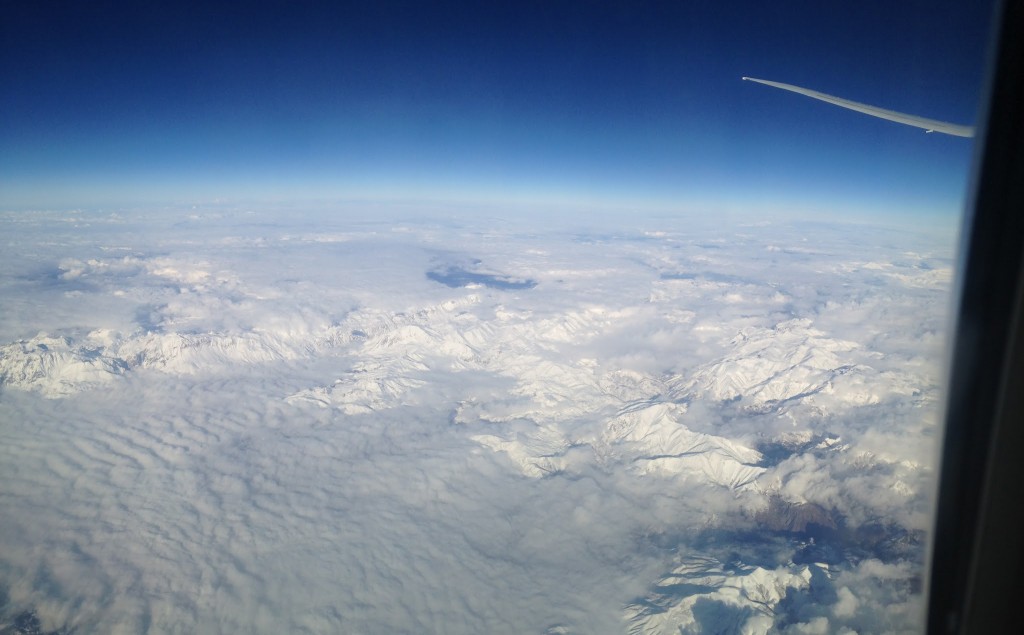 I wake up and we’re somewhere over Eastern Europe – flying the south-east edge of our great circle towards the Middle East. The sun is shining. It’s day time. Time to get up. I feel like I could sleep another 10 hours, but I know my body will thank me tonight, so I get up and spend a good 30-40 minutes just pacing in the cabin. Most of the plane is still asleep and the crew is congregated in the back, so I’m able to just walk up and down the aisle unencumbered. It feels good to move. I get a cup of coffee and now we’re really awake!

And that brings us to where we are now – somewhere over Eastern Turkey. I can’t help the visceral reaction as the map in front of me pops up the names of nearby cities – Baghdad, Amman, Tehran – that I’ve only heard about in the news. I like to think of myself as well traveled, but really the area with which I’m familiar is such a tiny spec on the map that it seems inconsequential. The feeling of intimidation is familiar and brings me back to the 18-year-old flying into Quito for the first time. Everything new and terrifying and wonderfully exciting. 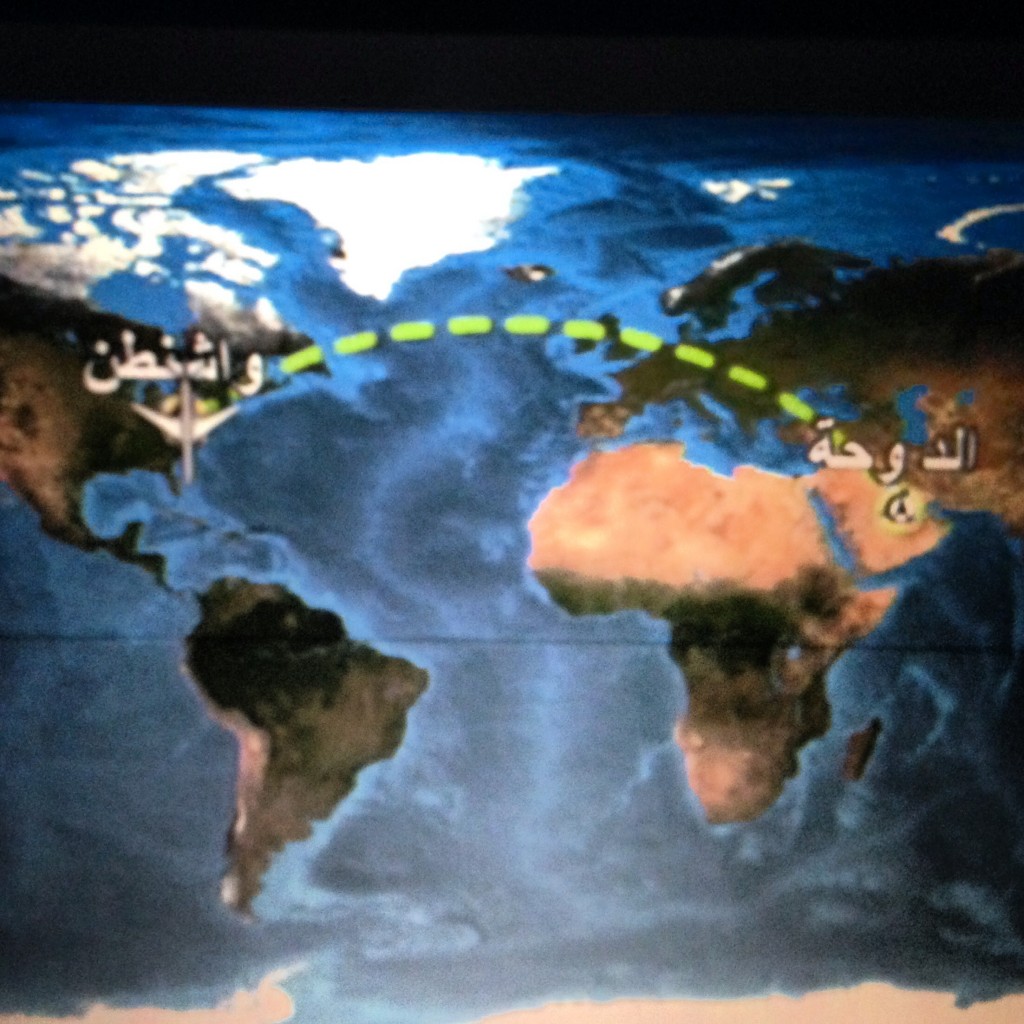 But I can’t let my adrenaline get the best of me. I’m here first and foremost to run. To race. And I’m ready to have a good race – a great race. I am well prepared, I am excited, I am ready.

This is the moment. I’m just enjoying the ride and waiting to see what the next moment brings. 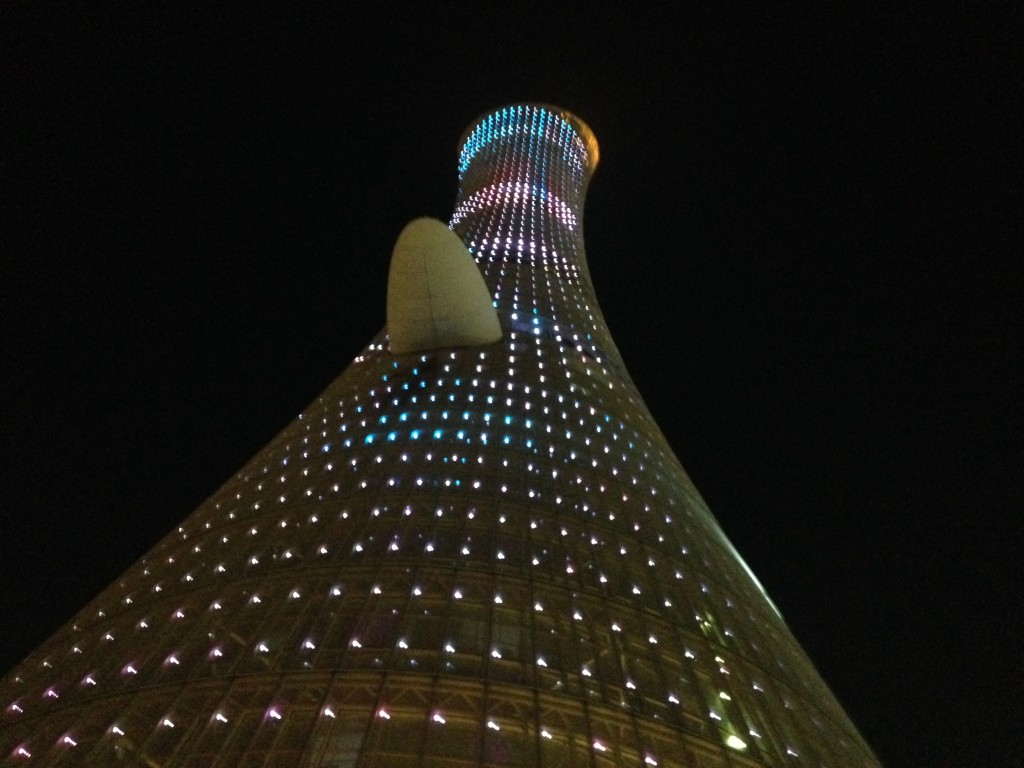 Next stop: The Torch