I prefer Ira Glass(*) to Eminem… at least when it comes to my pre-race listening choices. However, it hasn’t always been that way. It’s taken me almost a decade to really develop and cement a great race-day routine. Whether it’s how long to warm-up, how much breakfast to have, or where to store my car keys, I’ve figured out what works pretty well for me through a process of trial and error.

As we’re entering race week for the Time To Fly 50K, I want to share my pre-race routine that I’ve put together from 10+ years of racing experience.

(*) The smooth-voiced radio host of NPR’s “This American Life”.

The evening before the race

From my experience, I have learned to work backwards when planning my evening. If the race begins early in the morning, that means that I will have to wake up early. Transitively, that also means that I should go to bed early in order to rest up for the following morning’s race.

Other than eating my pre-race gnocchi and animal crackers (see this nutritional blog post for more information about how I fuel my body before a race or hard effort), I mostly try to keep myself entertained and in a good mood. Some activities that I do before racing include: writing, watching a movie, or spending time with friends (or Richard Parker – let’s be honest). However, these activities all have something in common: they provide me with a method to distract myself from the upcoming race, all while allowing me to remain in a resting position. 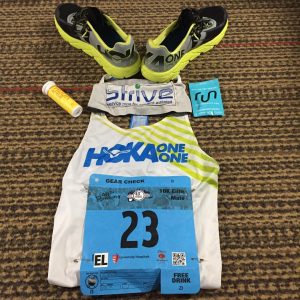 Before I say my goodnights, I make sure that everything that I will need in the morning is placed together. This includes my HOKA ONE ONE singlet and racing flats, gels, Vasoline, warm ups, and charged watch. Additionally, I review the race day logistics so that I know exactly where I should be going, what time I need to leave in order to get to the start, and what time I should begin my warmup. Lastly, I review the course, including elevation profile, and mentally prepare for the section where I want to make a move.

Then, before most people in America have eaten dinner, I’m already in bed, asleep. To accomplish this feat, I skew my evening schedule earlier. For example, if I want to go to bed two hours earlier than normal, I eat dinner two hours earlier than I usually would. After that, everything else will follow suit. If I need to go to bed super early, I drink some chamomile (or sleepytime tea), which helps increase the body’s production of melatonin.

I wake up about three to four hours before the starter’s pistol. Through my past races (and tough workouts), I’ve learned that my body responds best to having some extra time in the mornings to slowly wake up.

Pro tip — during your harder training efforts, practice getting up about the same time that you will on race day! This way, you can practice your routine, and it won’t feel incredibly foreign on race morning. 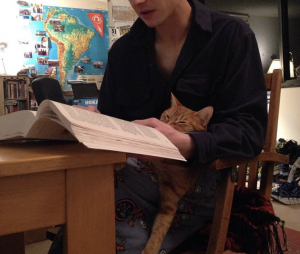 After quickly turning off my alarm, I turn on the lights (as it’s usually dark outside), and fix a cup of black coffee. While my coffee is brewing, I do a last check that everything is ready to go, and then don’t think about the race until it’s time to leave.

While sipping my coffee, I mentally engage in an activity that is not directly relevant to the upcoming race. For me, these activities can include talking to friends and family, playing with Richard Parker, reading a good book, or writing a blog entry. Soon enough, it’s time to head to the starting area!

Generally speaking, I leave the apartment in time to get to the race about 60 to 75 minutes before the gun. However, this depends on the size of the race, and how long of a warmup that I’ll do.

Once I arrive at the starting area, I promptly locate areas of importance: check in, bathrooms, bag check, somewhere warm (and dry) to sit, start line, etc. If I have a bit of extra time before beginning my warmup, I find a quiet and comfortable place to sit and relax. Unlike some people, I don’t try to get “pumped up” before a major event. Instead, I focus on remaining in a calm state of mind — I read a book or listen to something relaxing; This American Life is my go-to, as Ira Glass has a very calming voice that can settle my pre-race nerves.

Pro tip: Always be conservative with your pre-race schedule; it’s always better to have a couple of extra minutes than to feel rushed and consequently skip part of the warm-up. You can always run an extra stride or two if you feel yourself getting chilly.

For me, more adrenaline is the LAST thing that I need at the start of a big race — especially when most races that I compete in will last for several hours — I want to keep a level head and not go out like a madman during the first few minutes of a race.

Pro tip: While you are training, I recommend that you develop a routine to prepare your body for an intense effort. For me, these preparations include jogging, drills, and strides, plus allowing myself some extra time to use the bathroom, change out of warmups, and get to the starting line on time.

The amount of time that I spend warming up depends on the race distance. For a marathon or 50K, I jog for about ten minutes, and then do some light drills, followed by a couple of strides. All in all, this takes me about 40 minutes. For a shorter race, like a 5K, I will jog for about 20 to 25 minutes, perform a list of more extensive drills, run 5-7 strides, and then run roughly 200m at goal race pace. My pre-race preparations for a shorter race take almost an hour.

Pro tip: Adjust your warmup to comply with the race day weather. If it’s hot outside, spend a little bit less time warming up. During hot temperatures, such as the 50K World Championships in Doha, the body will warm up faster (and trust me, you’ll want to save your energy for the race itself). The idea is to get the legs moving without generating too much body heat. If it’s super cold or raining, bring a trash bag (with a hole cut in the bottom) that you can wear over everything until just before the gun. Or, you can visit Good Will (or dig through the bottom of your closer) for some large sweats that you don’t care about ever seeing again.

The first thing I do at the starting line is to find a position relative to where you expect to finish the race. If you’re on the actual line, you should be expecting to compete for the win; if not, you should position yourself further back.

Pro tip: for larger races, start your warm-up earlier, as you generally need to be in the starting area earlier. Some races like the Boston Marathon require you to be in your starting corral an hour or more before you’ll start running!

Once I am in position, I talk to the people around me. Not only will you figure out if someone nearby hopes to run a similar pace, but you will also remain relaxed in the tense minutes before the start.

Mentally, I always make an effort to smile and stay positive. There are multiple studies that prove that mood and athletic performances are closely correlated, and that smiling is a sure-fire method to elevate your mood. While some athletes put on a “game face” while waiting for the starter’s gun, I try to smile from ear-to-ear, think about my loved ones, picture a previous race that went super-well, or even think about the ice cream sundae that I’m going to eat after the race. 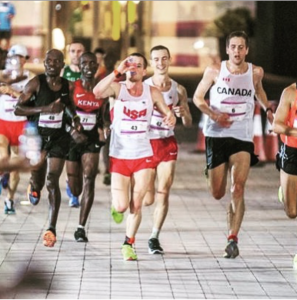 Final thoughts: expect something to not go according to plan

I have found that, especially when racing abroad, that there is almost always something that doesn’t go quite ‘right’. Whether it’s the fact that the race starts an hour late (happened in Ecuador), or you’re not allowed to move, speak, or leave your designated position on the start line for the 15 minutes before the gun (happened in Japan), there’s almost always something surprising that happens on race-day morning. While it’s great to have a routine so you can go through the motions without having to stress about what you’re doing, it’s also important to be flexible and let that routine adapt to new and unexpected situations.

What do you do in the hours leading up to a big competition? What’s the weirdest pre-race issue you’ve ever had to deal with?