Train Where Your Feet Are

Our “lazy” Sunday started with a long run ranging from 60-80 minutes towards Cuy Town (named because the town is filled with cuyerías that serve the famous Peruvian delicacy of guinea pig on sticks). After we finished, we headed out to brunch at a restaurant called Blue Llama which entailed stuffing our faces with “unlimited” (limited) pancakes. Or, in Nicolette’s case, her vegan diet limited her to an unnecessarily pricey platter of toast and marmalade. Shortly after breakfast, we went perusing through the Pisac Sunday market. Some of us bought fresh fruit and produce while others purchased alpaca socks, pants, wooden spoons, and watercolors. Later that afternoon, we got the opportunity to talk to professional ultramarathon runner Patrick Reagan who gave us insight into his rigorous training and lifestyle running for HOKA. The rest of the day was spent trying new snacks around town including the infamous barber shop cake (yes, desserts are sold in the same place where people get their hair cut).

Monday was a quiet day in Pisac because many people went to Cusco to celebrate Inti Raymi, also known as the Sun Festival, which is one of the largest festivals in South America. Let’s just say we relished in the peace and quiet as most days our alarm clock isn’t a rooster but rather cannon fire. After our morning run, we talked to another elite marathoner and former STRIVE staff member Meghan Peyton. She discussed the science behind successful training and what it’s like to be a college coach. Next we tackled creating our first PE class for STRIVE center where we offer free after school PE and English classes for the local community. We wrapped up Monday with our group Circle reflection under the stars.

The past few days have been jammed packed with work, with Tuesday marking our first day of service! Interns Dana, Isabel, and Nicolette went early in the morning to help in classes at Tambo de Gozo, a local private school in Pisac. They helped kids ages 3-5 with math, motor skills, English, Spanish, science, and the occasional wiping a 3 year olds nose or tying their shoes. Lara and Grace took the place of the first wave of interns in the afternoon and helped the teachers with various lessons and projects with the ultimate goal to create a positive impact in the classroom. In the afternoon, we had our first STRIVE center PE class which included playing a large game of soccer, dogs and cats (sharks and minnows), and red light, green light. The afternoon was full of laughing, smiling, and breathing heavy (playing soccer is way harder at 9,700ft!).

On Wednesday, our morning and afternoon was spent similar to Tuesday, however, we were fortunate enough to speak with Stephanie and Ben Bruce, both professional runners for HOKA ONE ONE and the Northern Arizona Elite team. The interns loved the talk and the couples’ go-to message of “dream big, but train where your feet are”, as the message speaks measures to our intern/training summer program here in Peru. We closed the day volunteering at an after-school center that provides English, art, Quechua (native Incan language), and weaving classes. The interns led an English class for 15-20 students which was a large learning experience for both the students and interns alike! Overall, we are very excited to continue volunteering with the after school organization and Tambo de Gozo school throughout the summer! 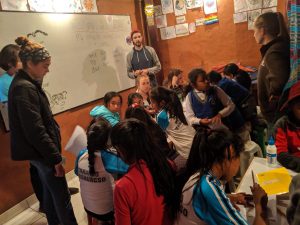 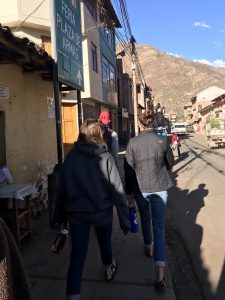 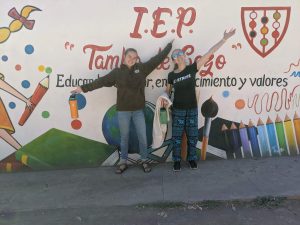