This Thursday was the interns third day volunteering at Tambo de Gozo school. Our interns are teacher assistants in classes of either 3, 4, or 5 year olds helping the teachers with various projects and lessons the students are working on for the day. For example, Dana taught the four year old class a lesson about counting in spanish, and Nicolette helped teach the five year old class a lesson about compound words. In the afternoon, interns visited neighboring cities to promote our upcoming service project, the Pisac 5k. We taped posters to poles and handed flyers to people who expressed interest. This will be the 3rd annual STRIVE 5k and we hope to have a higher turnout than the previous two years. After some successful advertising, the majority of the interns went to a class to learn the indigenous language of Peru, Quechua. The class was held at Amistad Sagrada, the same place where we helped out earlier in the week with after school English class. Many of the Peruvian students who attended the Engligh class on Monday recognized us and were excited to see us in a class with them! The teacher was very patient with us and we were all shown up by the young kids. Grace and Nicolette even tested their knowledge by counting to 100 in Quechua in front of the class. We concluded the class by introducing ourselves and saying our names, where we are from, and our occupations in Spanish, and then the teacher helped us translate into Quechua. When we got back from class, Sarah led a tough evening bootcamp that led up until dinner. It was Scott’s and Isabel’s turn to cook again, and they made breakfast for dinner, including eggs and hashbrowns. The night ended shortly after dinner because we were all exhausted from a busy activity filled day.

Friday morning we woke up around 6am in preparation for early morning hill sprints. We headed to the same hill as last week to attack our second group workout. This time around, the interns were challenged with 8 repeats instead of 6. After our morning run, the interns got dressed, ate a quick breakfast and headed back to school at Tambo de Gozo. Back at Chaska, we held our first weekly service debrief to discuss how we can improve on our future service efforts. We also touched on our service schedule for next week, including a visit to an animal sanctuary and a ruins site close to Cusco. Friday night dinner was cooked by Matt and Nicolette featuring a recreation of the market beet slaw. Post dinner, there was lots of talk of starting this blog (procrastination is still a thing here at Strive), but instead the interns chose to go to Sofi’s to restock up on Sublime (Peruvian chocolate bar) and chocolate covered raisins. We stayed up to a modern day record time of 10pm.

For our free day, we headed back to Cusco. Our first adventure was to hike up to the white Jesus, which is a famous statue perched high above the city of Cusco. On our exhausting hike up, a dog (we named him Leo) decided to join us. Next, we went and got lunch at San Pedro market, grabbing street food such as churros and pineapple on the way there. During lunch some of the interns mustered up the courage to try the pre-meal soup, otherwise known as “bile” soup because of its unique flavor. In the early afternoon we received a tour at Qorikancha, a very historic and important Incan temple. Throughout our day at Cusco we continued to advertise for our 5k, hanging up many flyers from one destination to the next. Our last stop of the day was at a rip-off market called “El Molino” where we could buy a “very authentic” Nike sweatshirt for 20 soles (about 7 US dollars). The day concluded back at Pisac with dinner at an Italian restaurant where we’ll eventually take the high schoolers. We enjoyed delicious pizza, gnocchi, and trout ravioli. Some of us even treated ourselves to vegan truffles and tres leche cake! It was a long day but full of adventures, great memories, and A LOT of food. Until next time, adios! 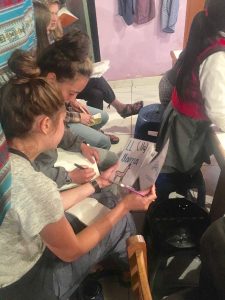 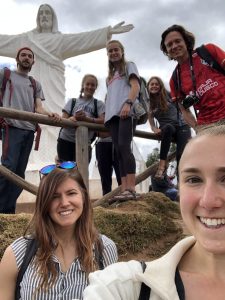